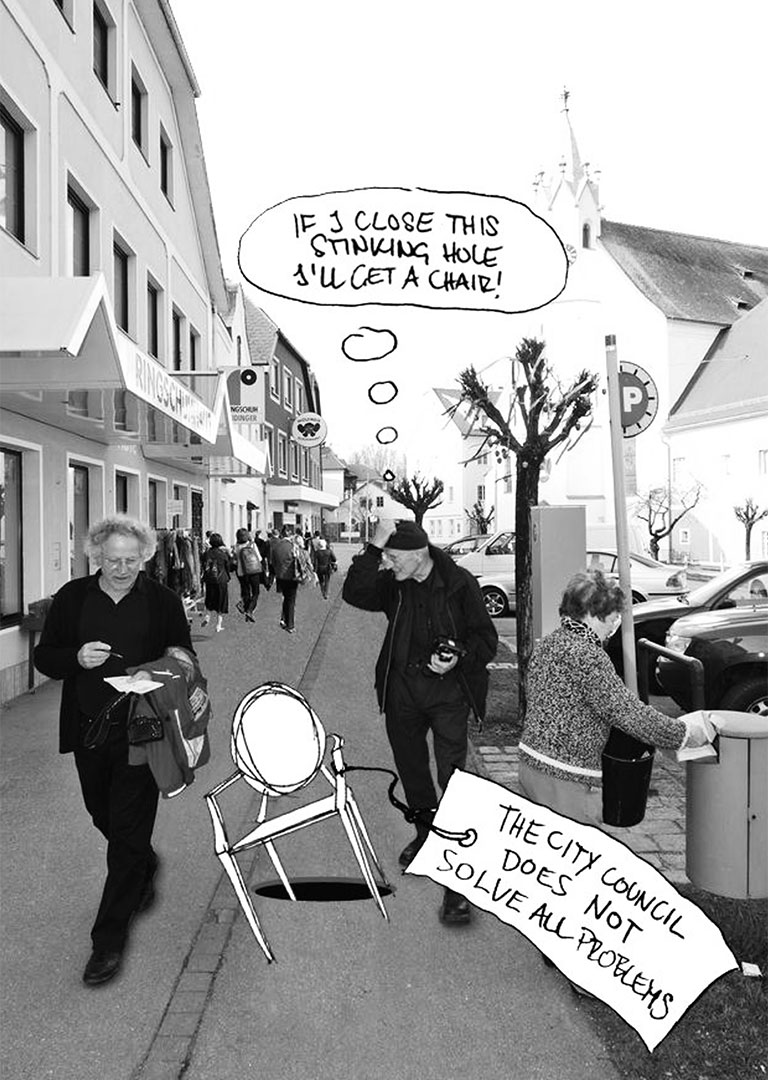 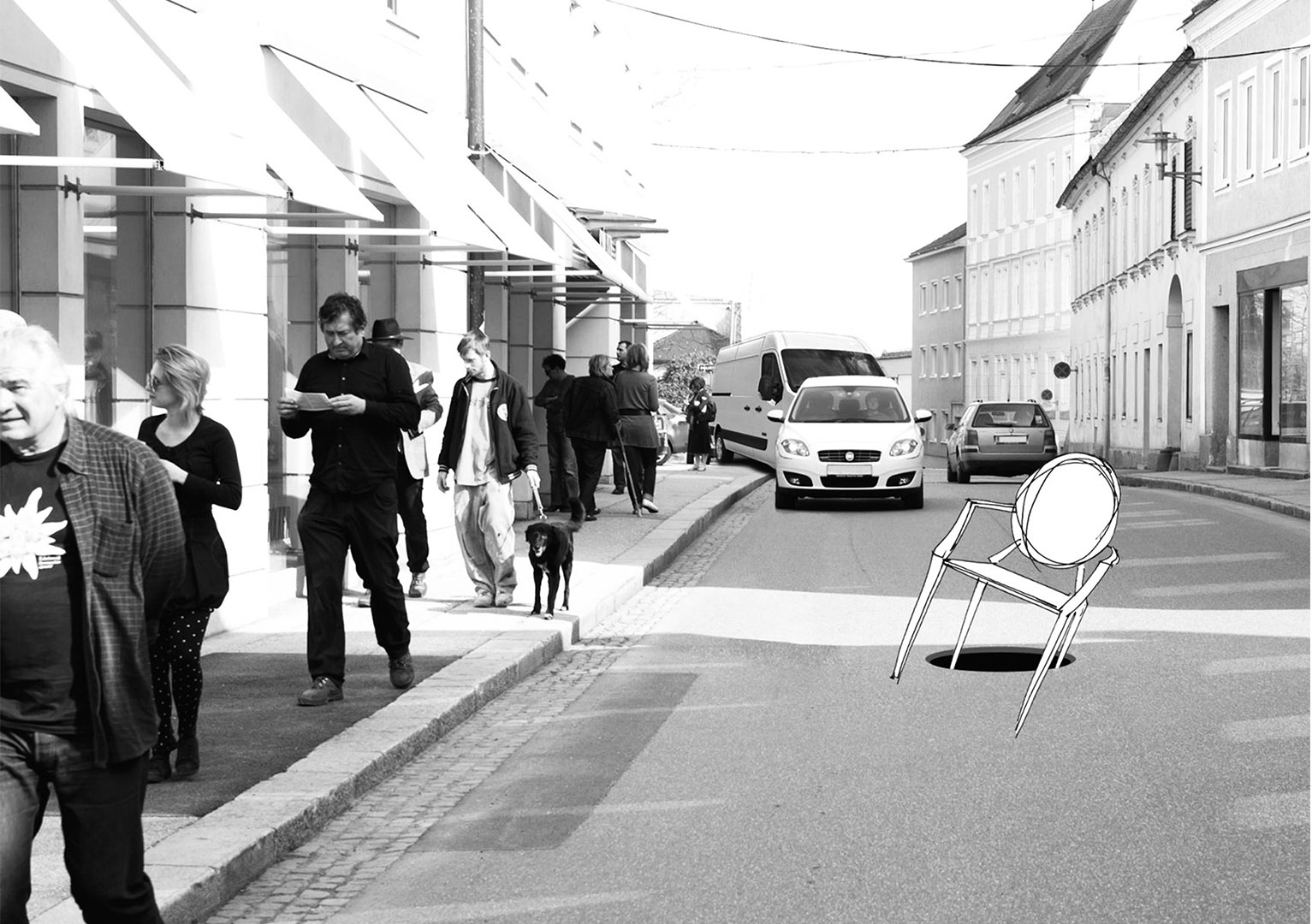 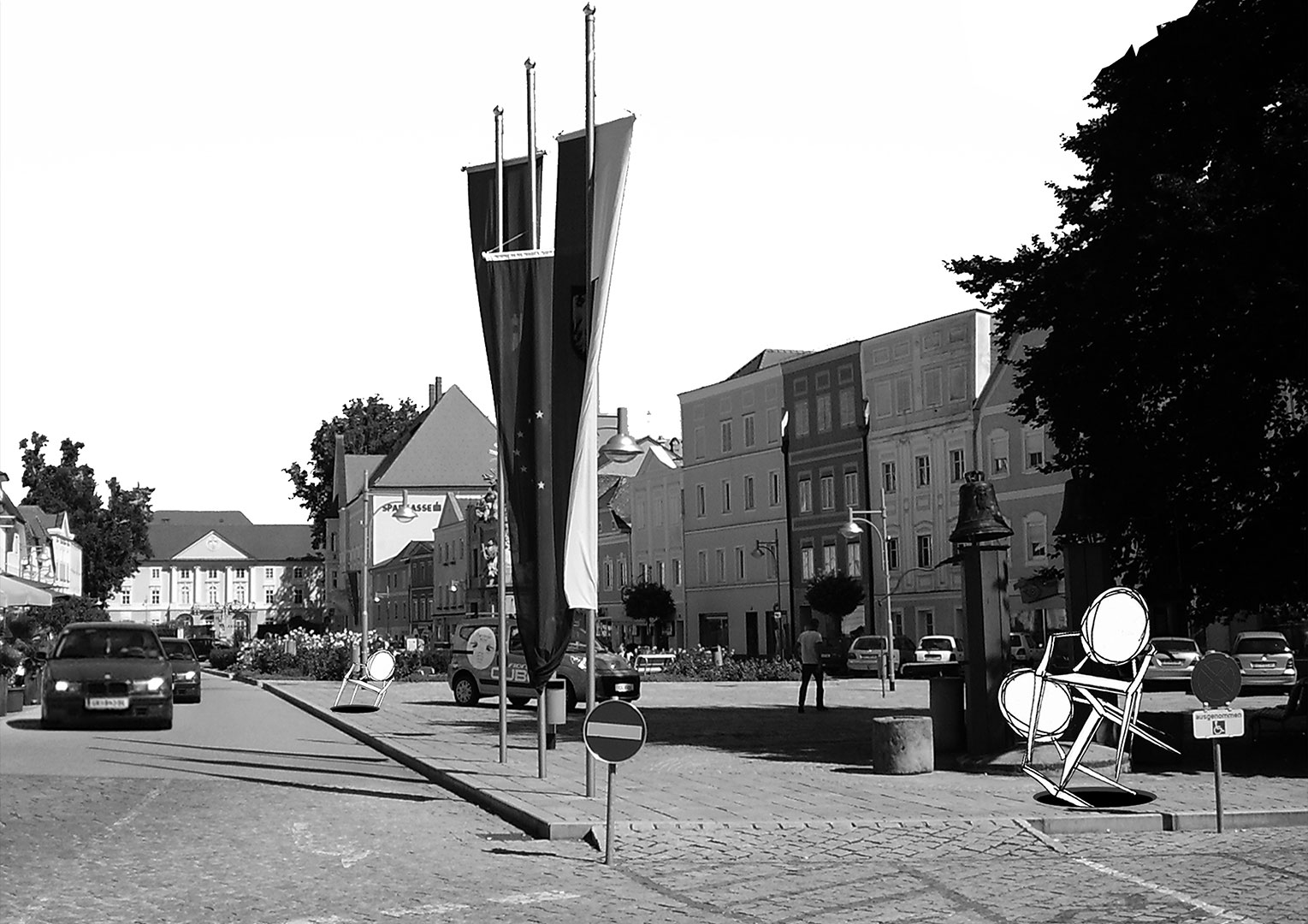 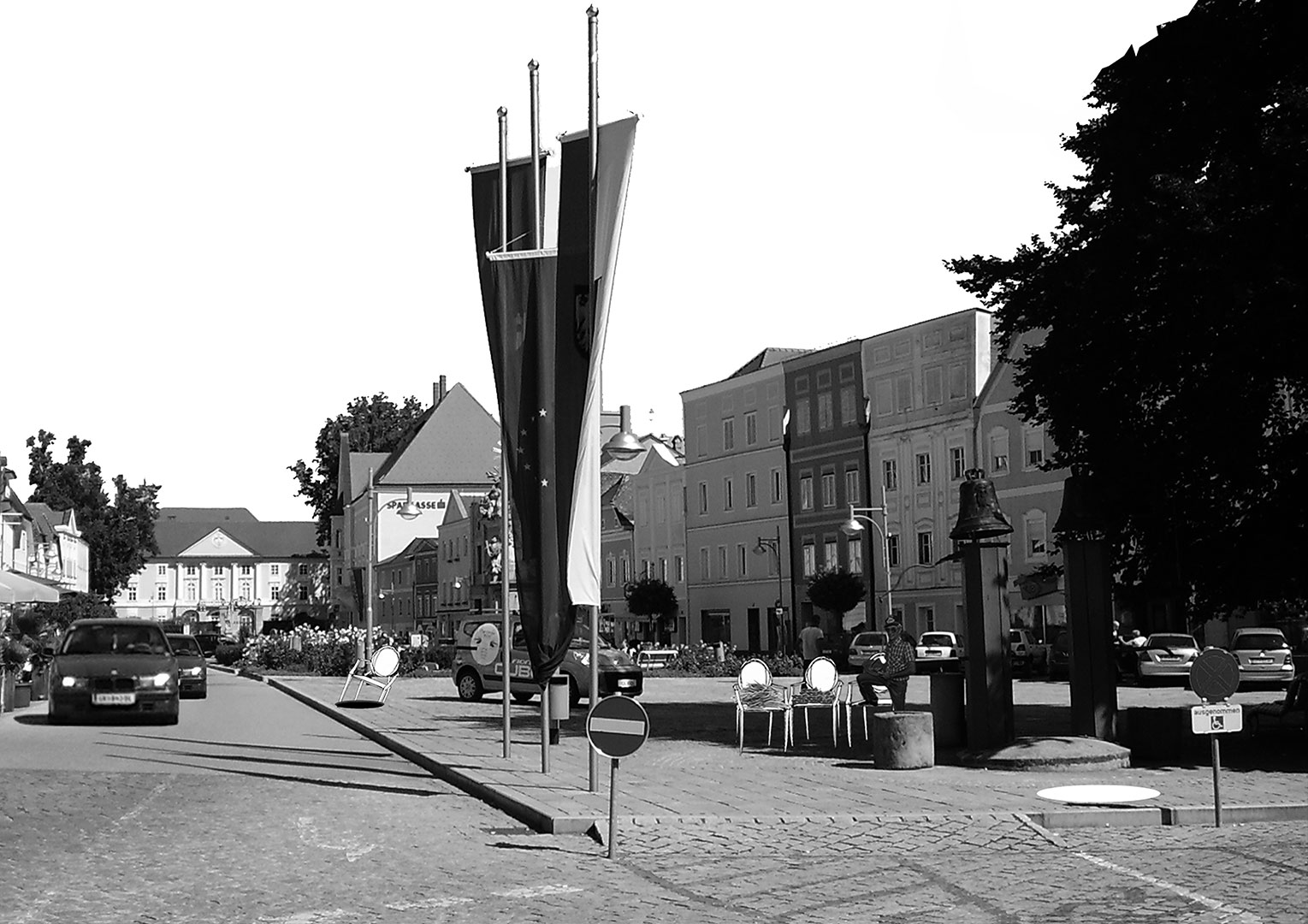 Eferding Schiferplatz: people walking notice a chair on the street. The unusual appearance attracts their attention. Why is there a chair on the street, they ask themselves?It is uncommon to see a piece of furniture on the street in an Upper Austrian town centre. Everybody knows how such places look like and work. Neat and tidy, they resisted all modernization processes and are more or less well maintained by the municipal maintenance staff. Periodical refurbishments end up merely as townscape glorification (Ortsbildgestaltung) to signify tradition.Getting closer to the chair, people recognize that the chair is actually sitting on top of a sewage hole. Why is there a hole in the street? Where is the cover? Did somebody steel it? No, why would one do that? Nobody in Austria has such financial needs. Our state takes care about people who are threatened by poverty. Anyway, who would give up on such an expensive chair?

Having a careful look a small tag tied to the chair becomes visible. It reads:

“The city council does not solve all problems.”

What happens when push comes to shove? When budget shortcomings become so large that local administrations cannot afford to maintain public places as nice and well-organized anymore? If due to scarcity of natural resources, sewage covers become treasures lying on the street. When the contemplative distance of privileging form over function is not affordable anymore?

With implanted crisis, the town center of Eferding does not get threatened with a far distanced reality but gets a critical update for a limited period of time. The installation discusses a situation of crisis and process of becoming as it implicates directions how to overcome it. Drawn from the Deleuzian concept of becoming, the built environment is considered as an emerging state of affair, which is constructed of connections, interactions and stabilized identities. Stabilized identities are to be understood as established codes of forms, action and meaning. In this regard upper Austrian town centers are considered as over-stabilized. This may help to delay impacts of crises but not to solve them. Solving states of crises requires creative acts and practical thinking, rather than latching onto seemingly fixed identities and a false security of bureaucracy.

Blurry zones, created by the growing shadows of over-stabilized identities and cracks opened up by crises form the test ground for new modes of cultural and economical production. The dislocation of the chair to secure the hole breaks up the stabilized identity of the chair and invites for a changeover into a world of creative-utilitarian action.

Every chair on top of an open sewage hole has a tag with an individual message like:

“Do with the chair whatever you want but secure the hole below it. “

“For whatelse can the chair be used?“

“It stinks, please close the hole”

By attaching messages to the chairs, inhabitants are invited to interact with the installation. Actual (on the spot) discussions and attempts to overcome implanted situations of crises might result in liberated chairs, which consequently can be used by the inhabitants (during and after the festival) as they want them to be. They become part of the city’s furniture of becoming.