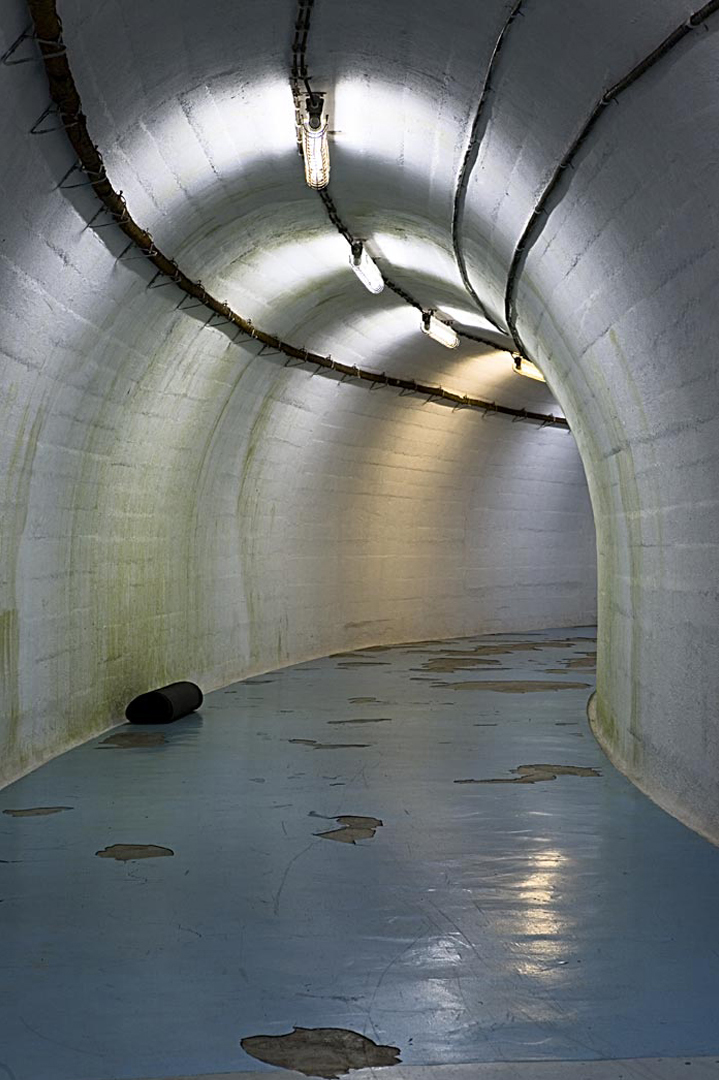 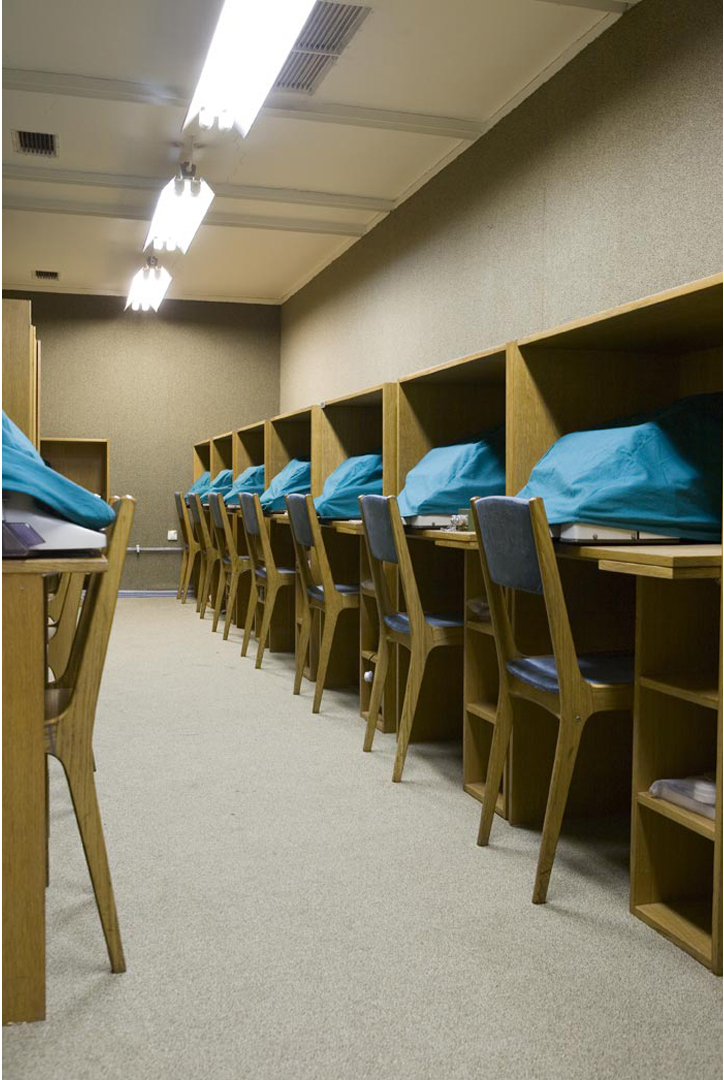 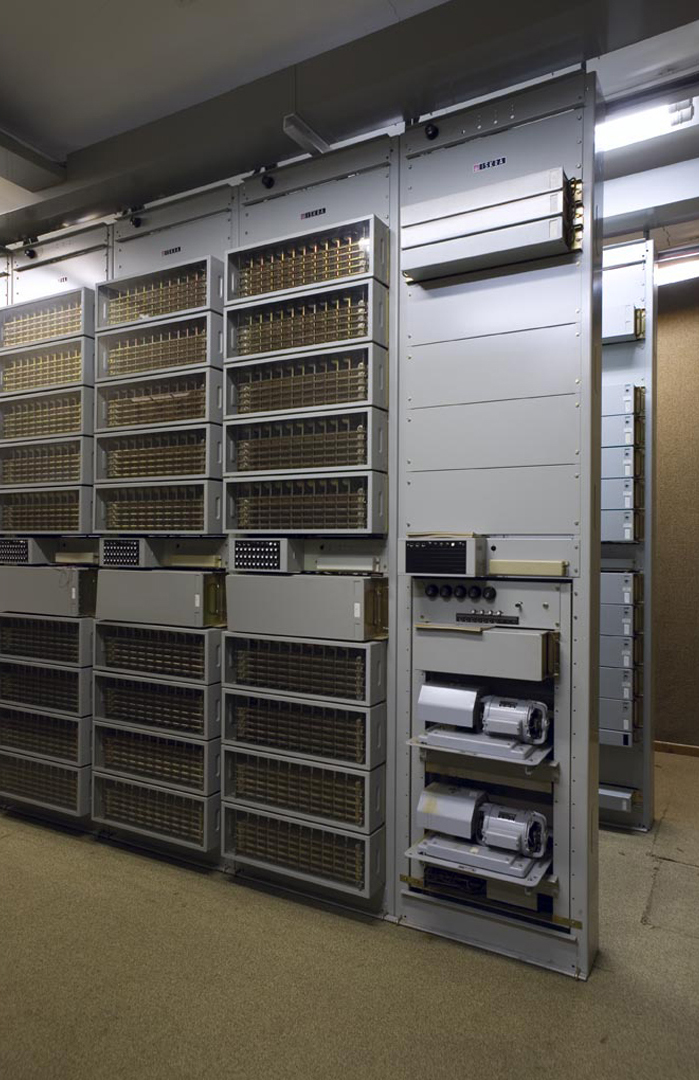 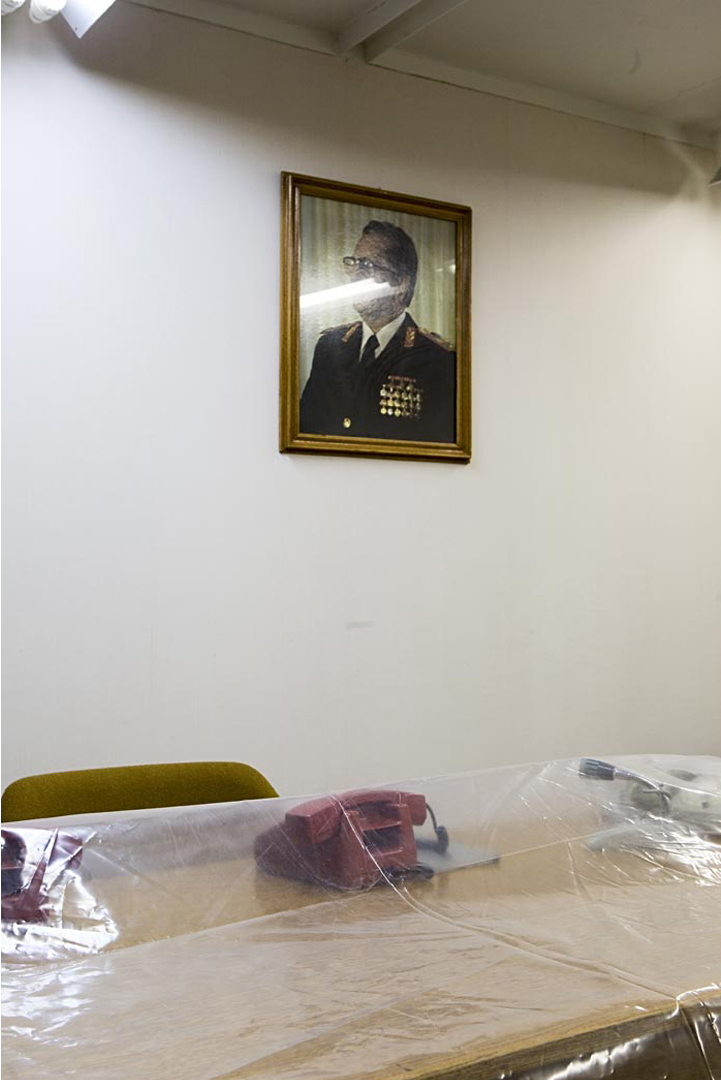 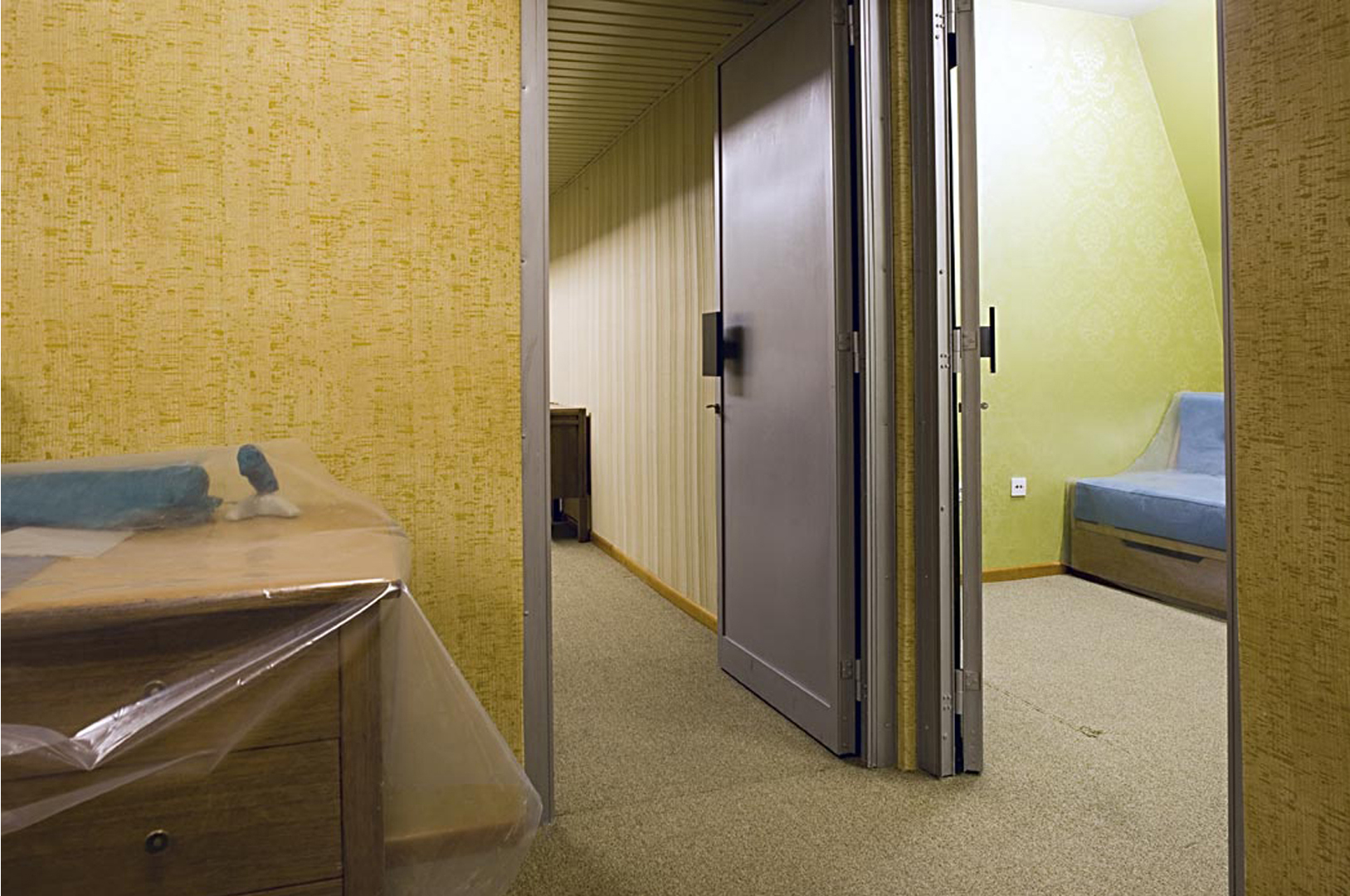 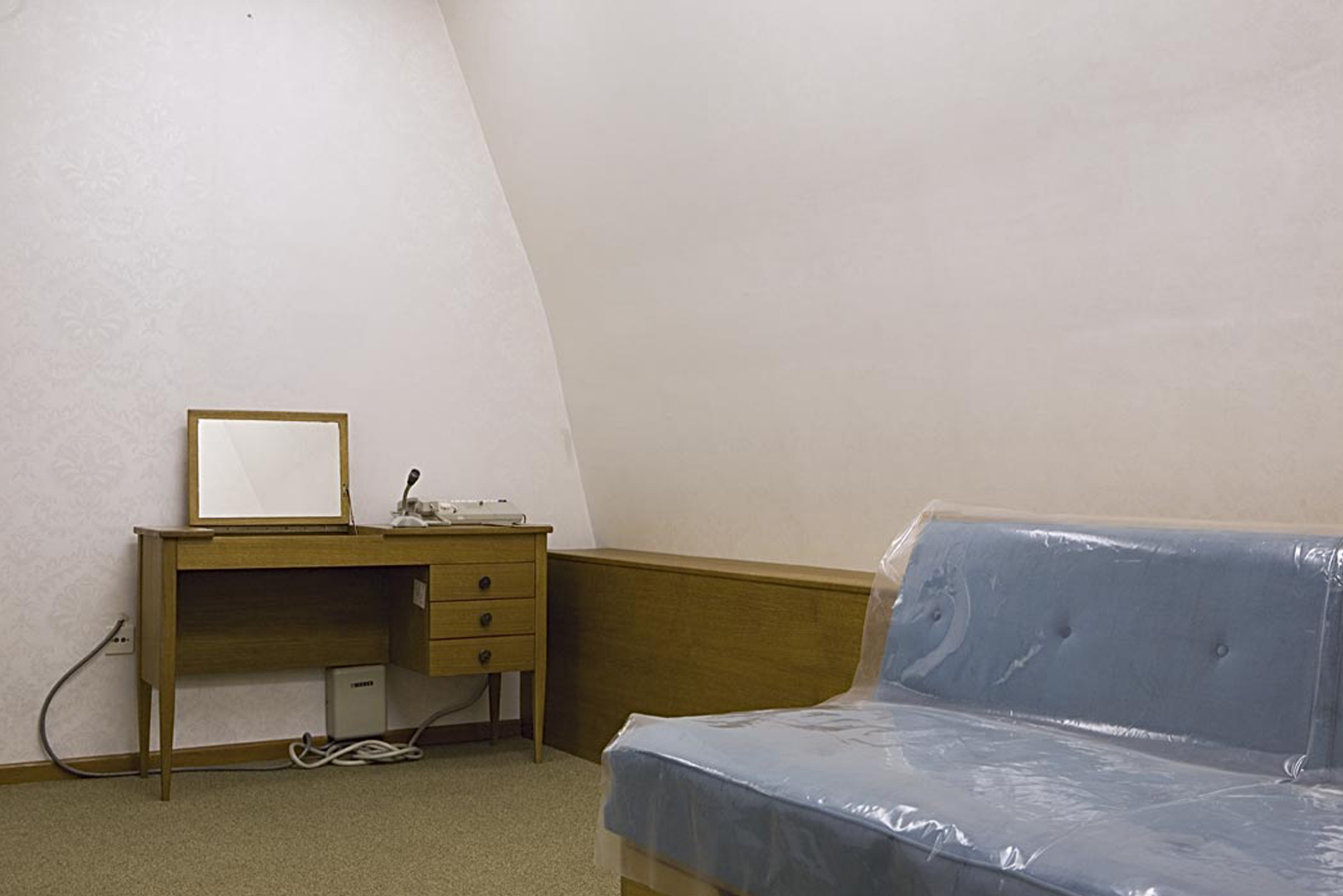 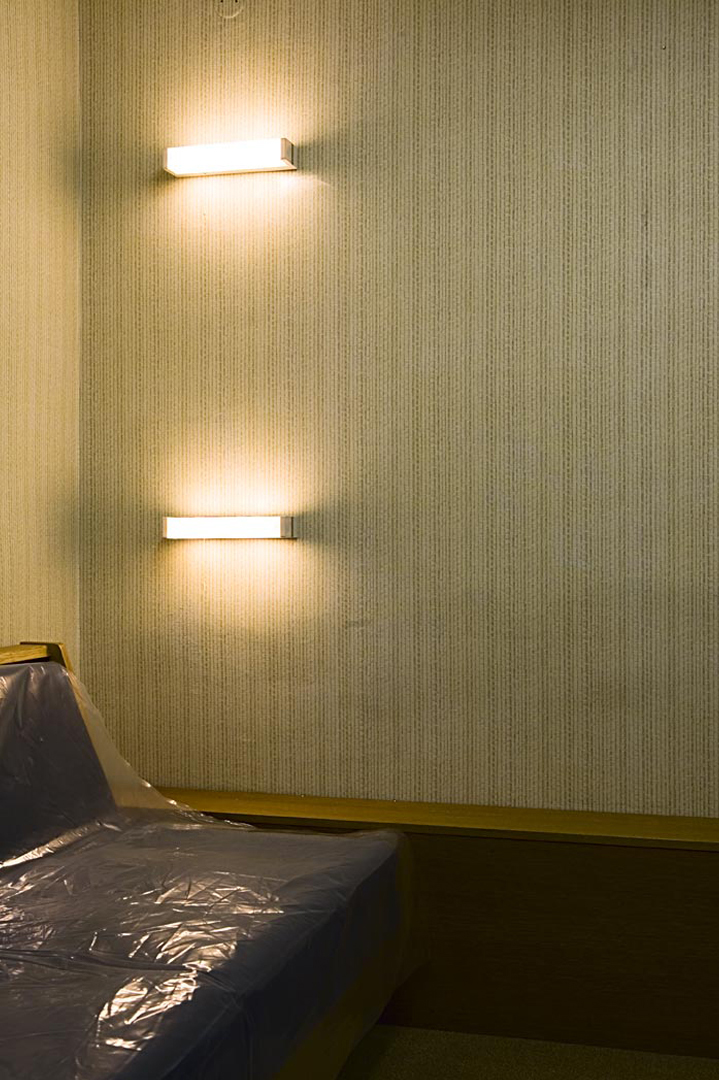 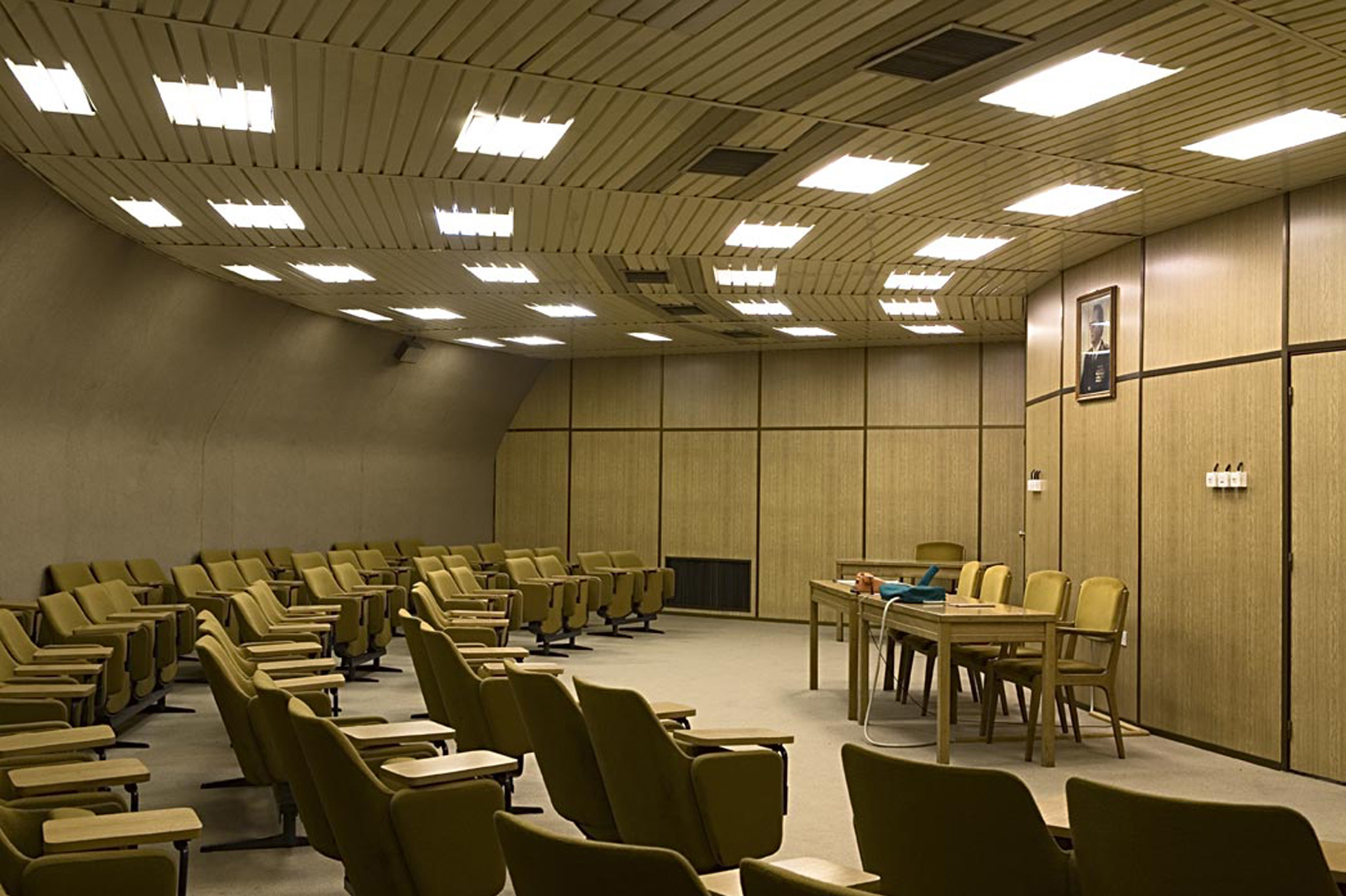 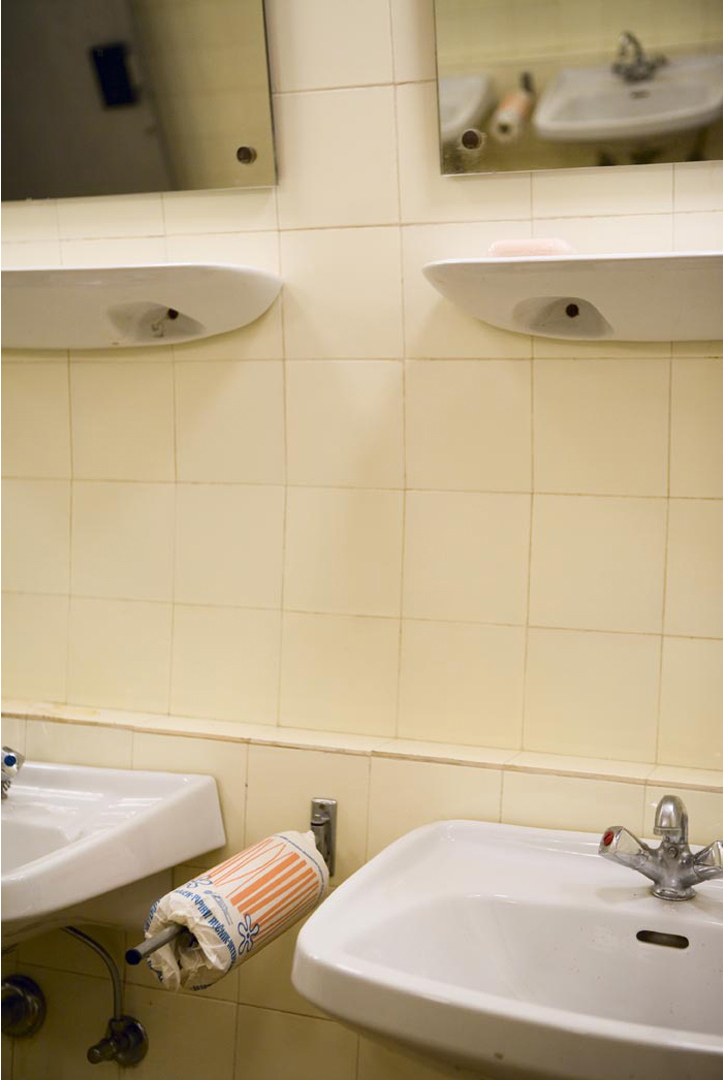 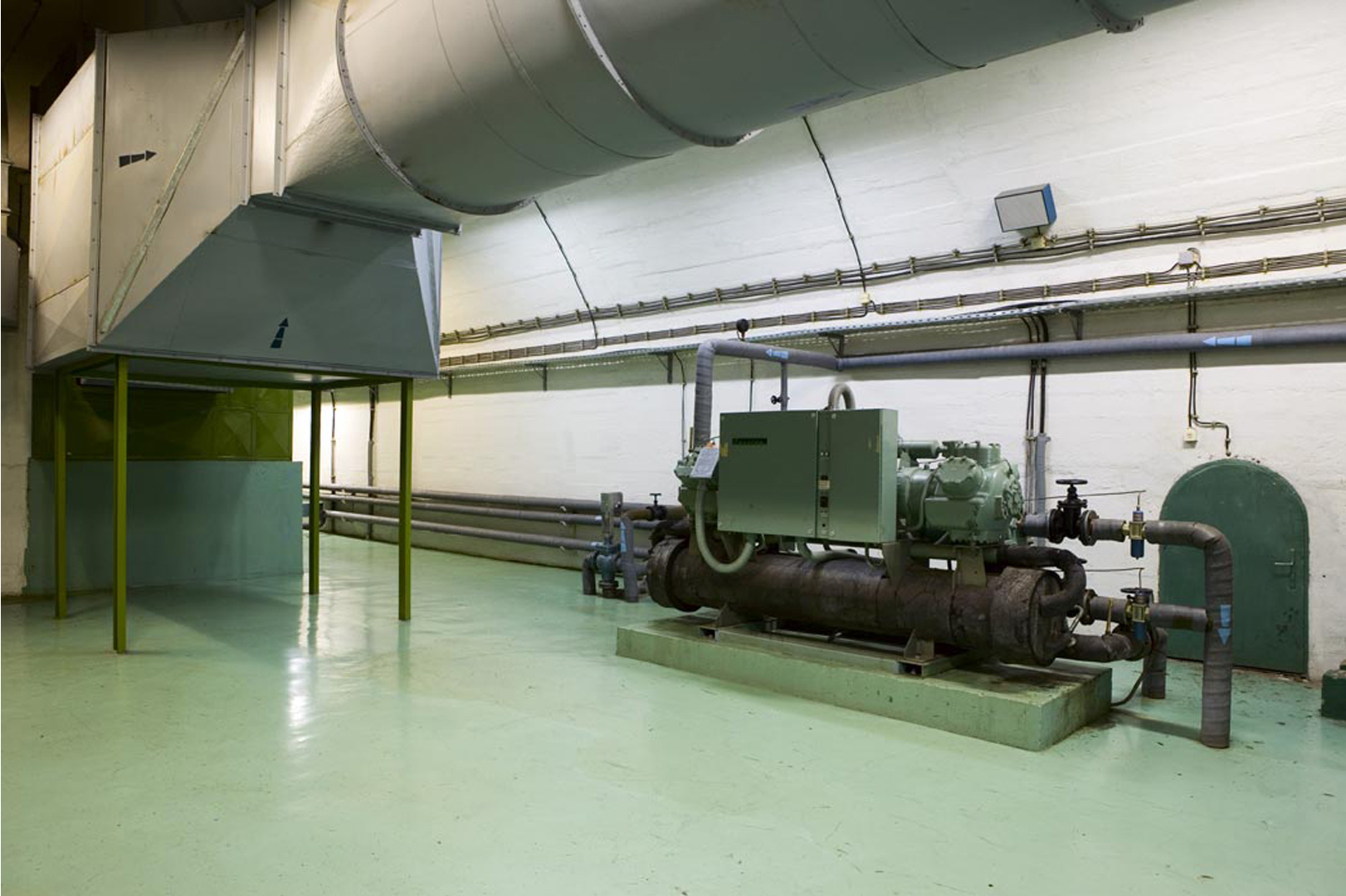 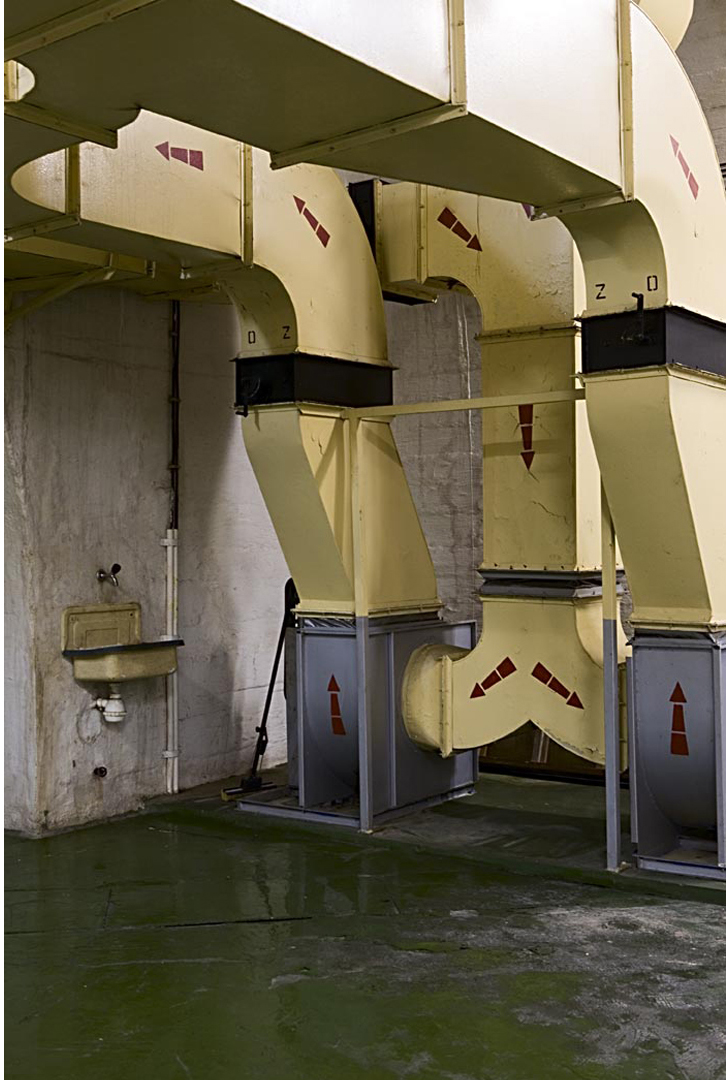 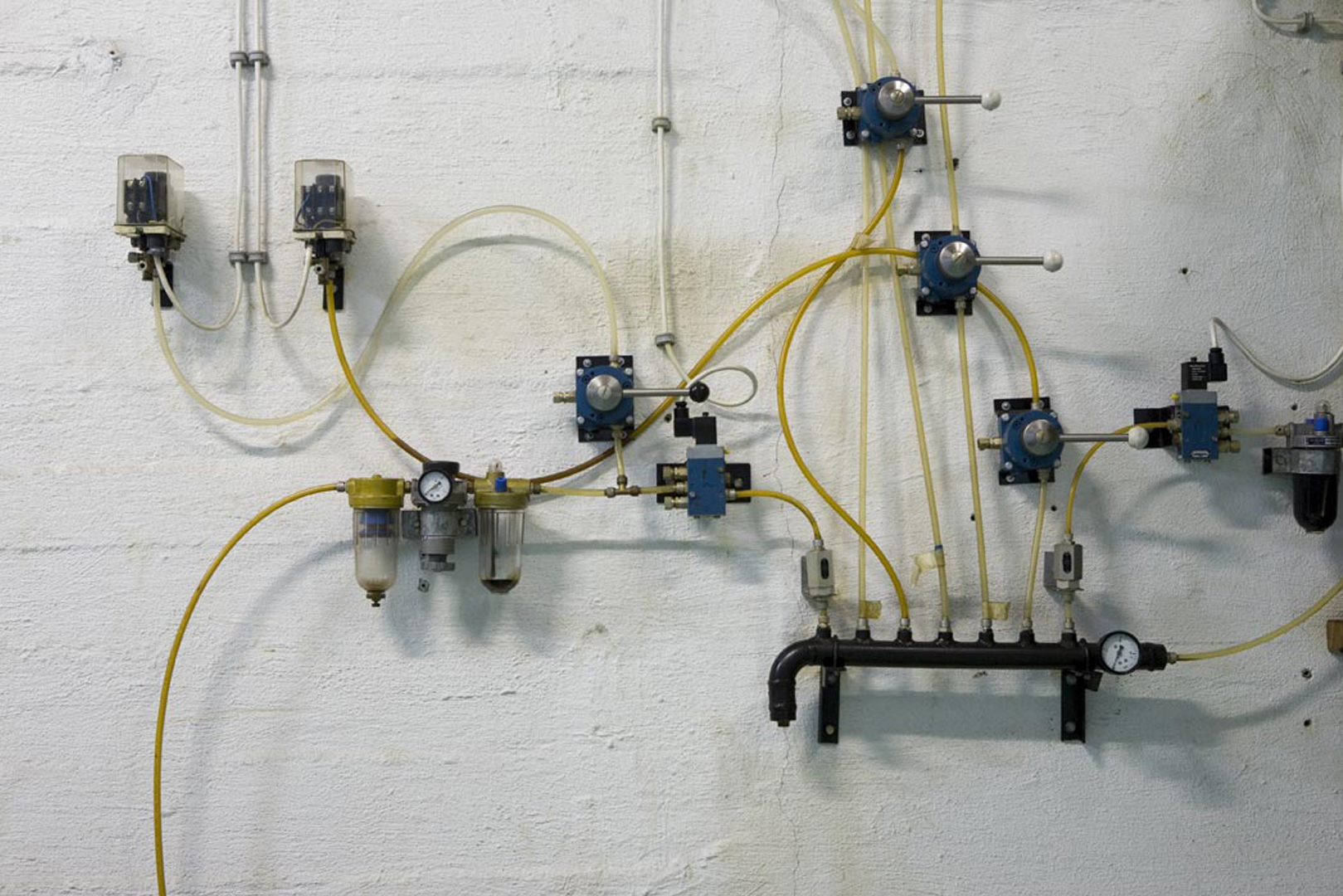 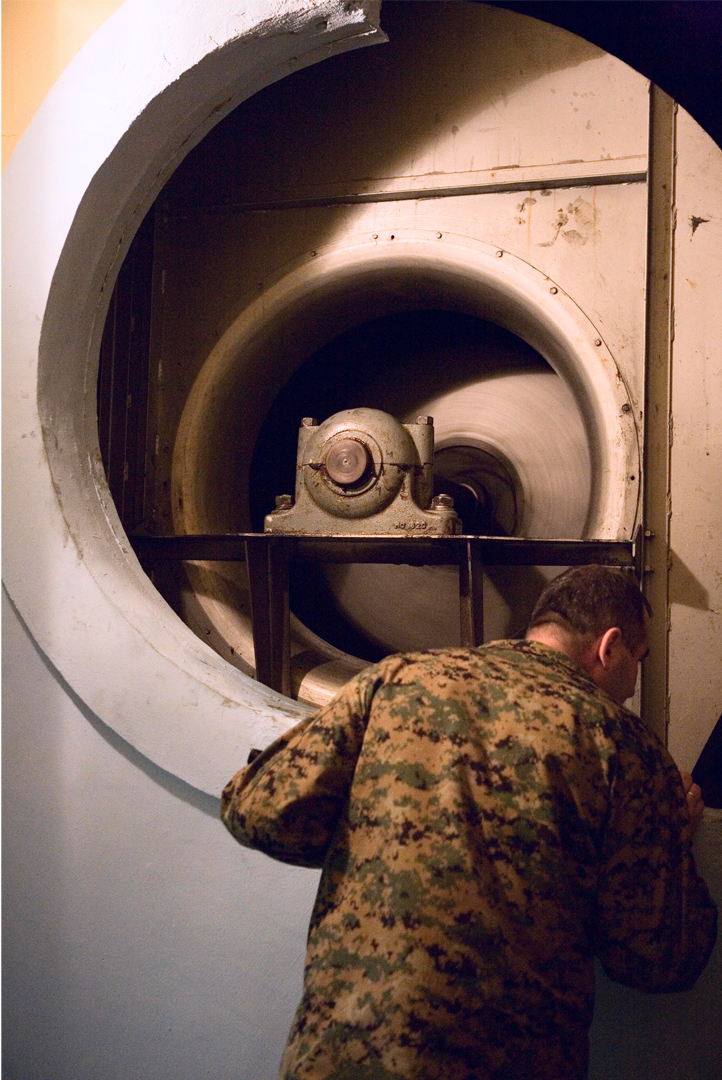 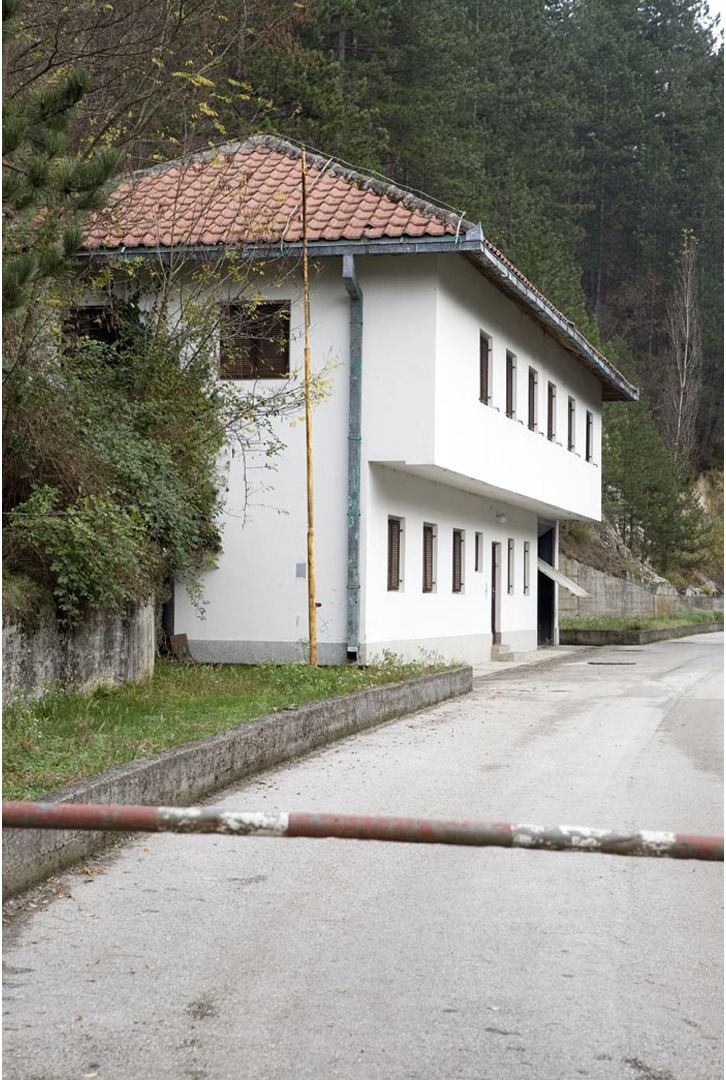 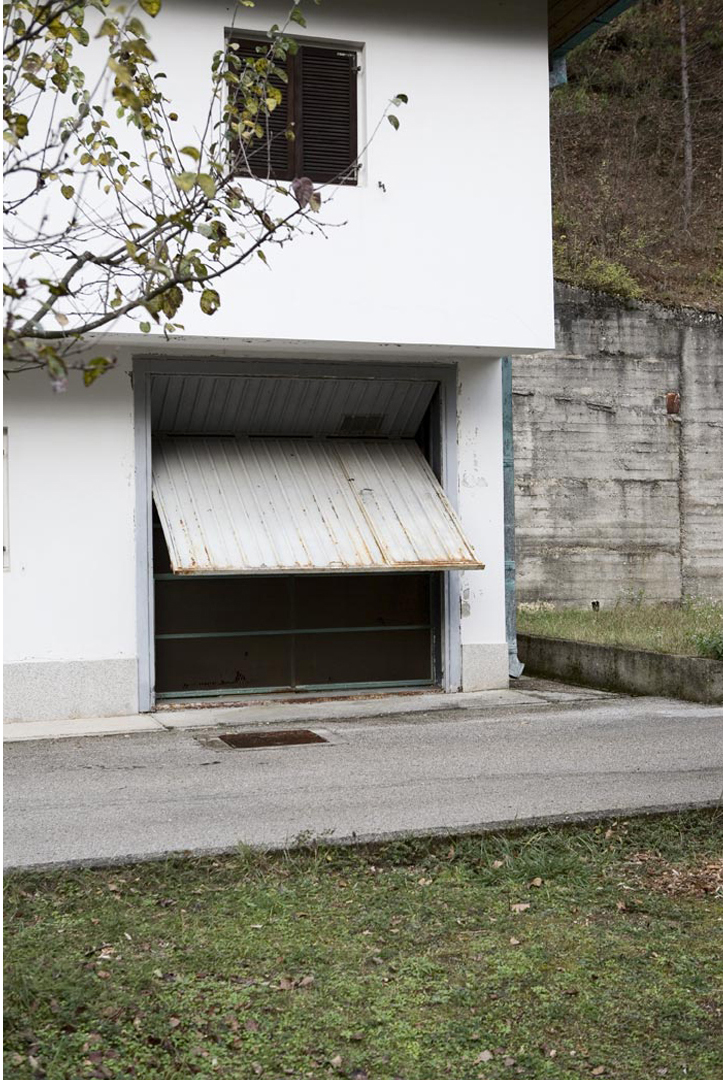 BENEATH THE REGULAR - The Architectural Remnants Of Cold War Yugoslavia

Twice a day, air handling units pump fresh air through a labyrinth of air ducts to maintain 21-23°C temperature at 60-80% humidity. Two transformers are on alternating duty to supply electricity. The water reservoir is filled with potable water from the adjoining Bijela Neretva river. Still modestly filled fuel tanks are ready to supply stand-by emergency generators. Various archaic appearing mechanical systems would have guaranteed automatic seclusion from the outside world and the engagement of self-sustainable building systems, providing an autarkic survival space for 350 people over a period of months.  What was in the event of a nuclear attack supposed to ensure the survival of the political and military elite of the Socialist Federal Republic of Yugoslavia now fills solitary spaces with fresh air and illuminates Cold War military artifacts for visitors, interested in the fiction-like premises of nuclear bunker D-0.

When Yugoslavia was expelled from CPSU dominated Cominform (Information Bureau of the Communist and Workers’ Parties), it became the only socialist European country, being independent from Moscow. Alternative economic models (Titoism) such as self-management and profit sharing with workers and different policies, regarding the further geo-political development of southeastern Europe, led to the break with Stalin. Trapped between NATO and Warsaw Pact and their MAD(Mutual Assured Destruction) doctrine, the newly gained independence was accompanied by political fragility.  The fear of going to rack and ruin between East and West motivated Yugoslavia to become one of the founding members of the Non-Alignment Movement and led to massive investments into military infrastructure.

The geographic advantage of Bosnia and Herzegovina, being completely surrounded by other Yugoslavian republics, led to the establishment of strategically important industries in the country’s inaccessible valleys. A network of underground control posts, ammunition factories and power plants lies beneath the country. In the small town Konjic, 60 km southeast of Sarajevo, one of the most protected state secrets has been located. Built between 1953 and 1979, the nuclear bunker D-0 was the largest structure of its kind in Yugoslavia. During 26 years of construction, 20.000 m3 of excavated material was secretly transported from the site. A major part was further processed in the nearby JNA quarry and disguised as construction material.

The awareness of the consequences of atomic explosions made nuclear fallout shelters the main typology of defense architecture during the Cold War. Even if one survives the initial explosion wave, the ensuing radioactive fallout is as deadly. With the development of modern warfare and first strike capability with little warning – attacks can happen anywhere at any given time – no time is left to escape to other places, only underground. Consequently, major military infrastructures, even airports (see Zeljava in Bihac) were made subterranean. The ground had to be sacrificed. With the construction of civil shelters, a complete society went underground.

The concurrence of two extreme – military and building service – requirements created premises with a unique utilitarian touch. These premises cope with all well known fictional images of the Cold War, as illustrated in e.g. Kenneth Adams set designs for Stanley Kubrick’s War Room or James Bond films. Structures like D-0 were mostly hidden from the public. They functioned as invisible abutments of Cold War societies. As Michel Foucault may put it, they are places outside of all places; illusionary places, which expose all real places as even bigger illusions. Their existence questioned the conventional spatial organization. This might be best illustrated with a map of the secret JNA telecommunication network mounted in block 6. While in the conventional life Istanbul is considered the capital of Turkey, for the critical period of time of war, another Istanbul –the code word for D-0 – would have become the capital of Yugoslavia, located 200 meters below ground, inside the mountain Prenj.

The bunker design is primarily based on functional considerations. However, it also gave space to representational attributes. It reflects the decision making structures of the Socialist Federal Republic of Yugoslavia. All basic functions are organized in simple metal structures, aligned within a tunnel like space.  In the centre of the horseshoe shaped footprint lies an elevated block, whose design exceeds purely functional considerations. It is elevated above the rest of the facility and contains interior design components not found elsewhere in the fallout shelter. It was for use by upper echelons of the Yugoslav government. Variously ornamented wall papers, kept in garish colors cover most walls and arches. Patterns and shades of green vary from room to room and characterize each space. The surface driven spaces provide no clue about the nature of their organization or construction. The unreal ambient is underlined by one alien piece of furniture – the cosmetics table of the First Lady. Its mirror does not only reflect these outdated spaces, but also the potential history and events imagined by the observer, which may have happened there. The reality of the structure blends in with the imagination of the observer, which makes the project appealing. As in Paul Virilio’s description of the Atlantic Wall, the possibilities of total war are ‘revealed here with its mythic dimension’.1

As in 1979, when the premises were handed over for use, the bunker is still fully furnished and equipped with military apparatus. Codebooks are positioned beside telexes and restrooms are equipped with originally wrapped paper towels situated beside hand wash basins.  After the Cold War, most of these bunkers were retro-fitted to adapt to normal warfare. Except of D-0, which was never used. The bunker in Konjic joins a row of defense installations such as the Atlantic Wall along the French coast or the DEW Line in North America, which are not only heritage monuments of contemporary history. They remain to remind “us less of yesterday’s adversary than of today’s and tomorrow’s war”. 2