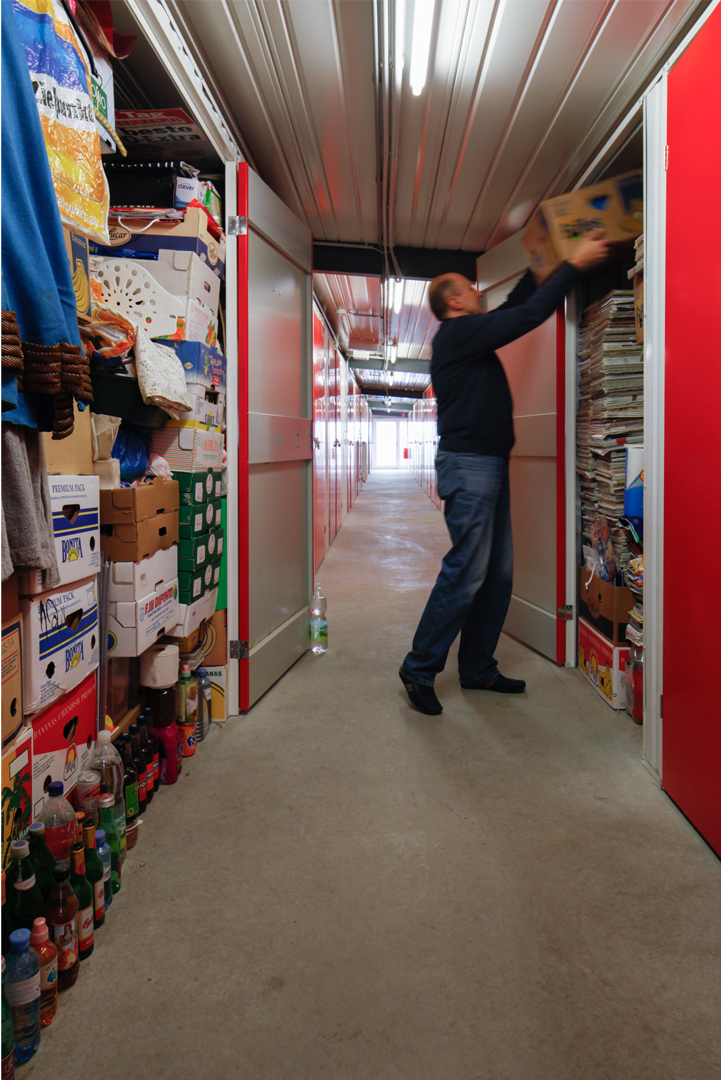 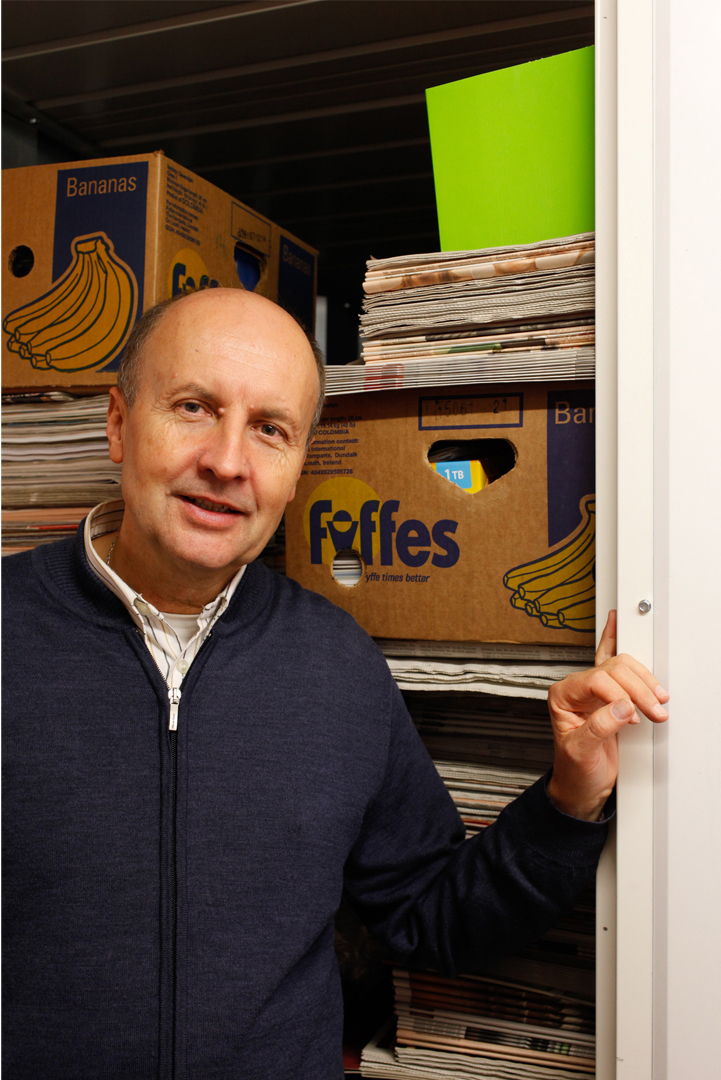 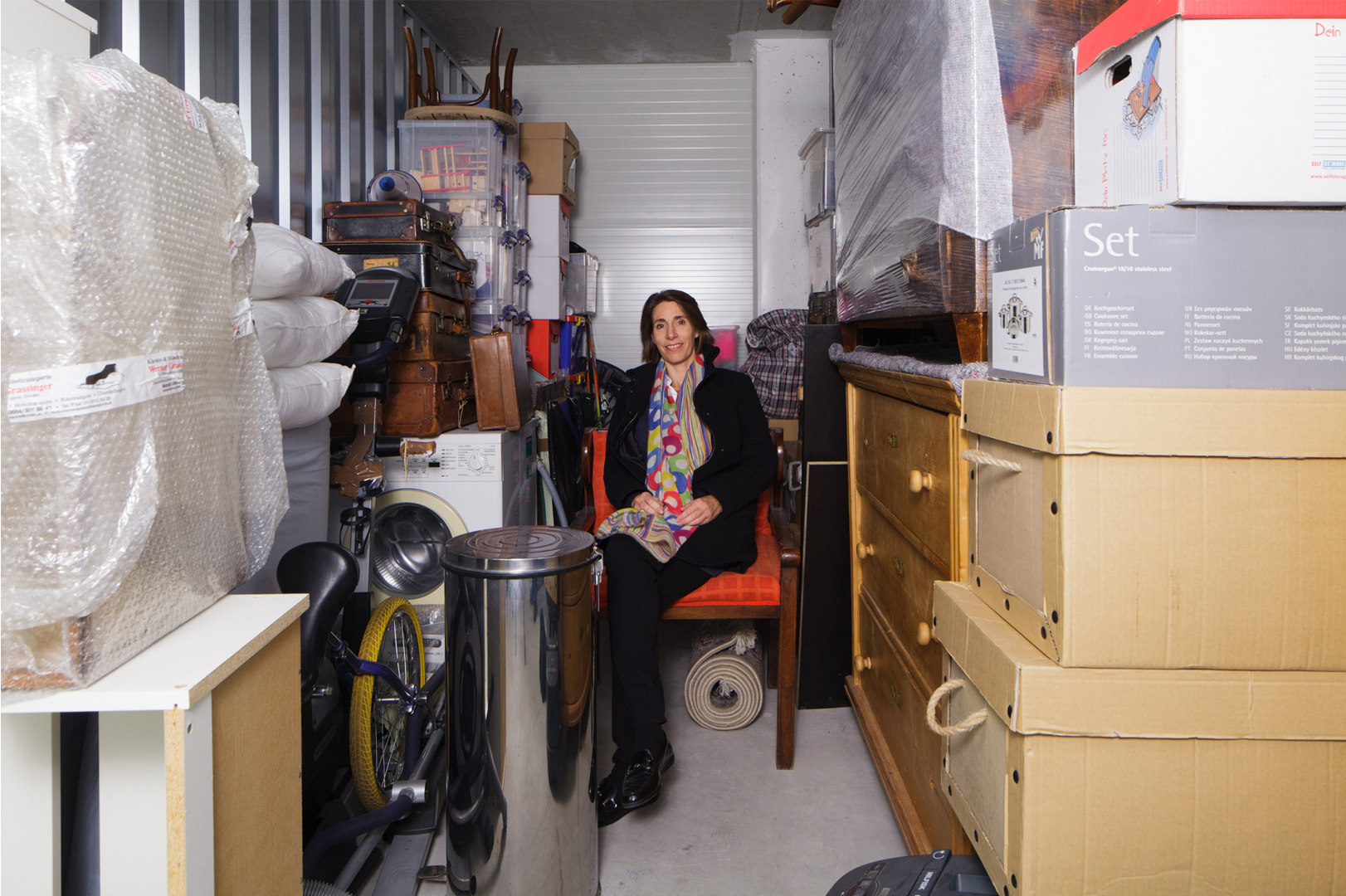 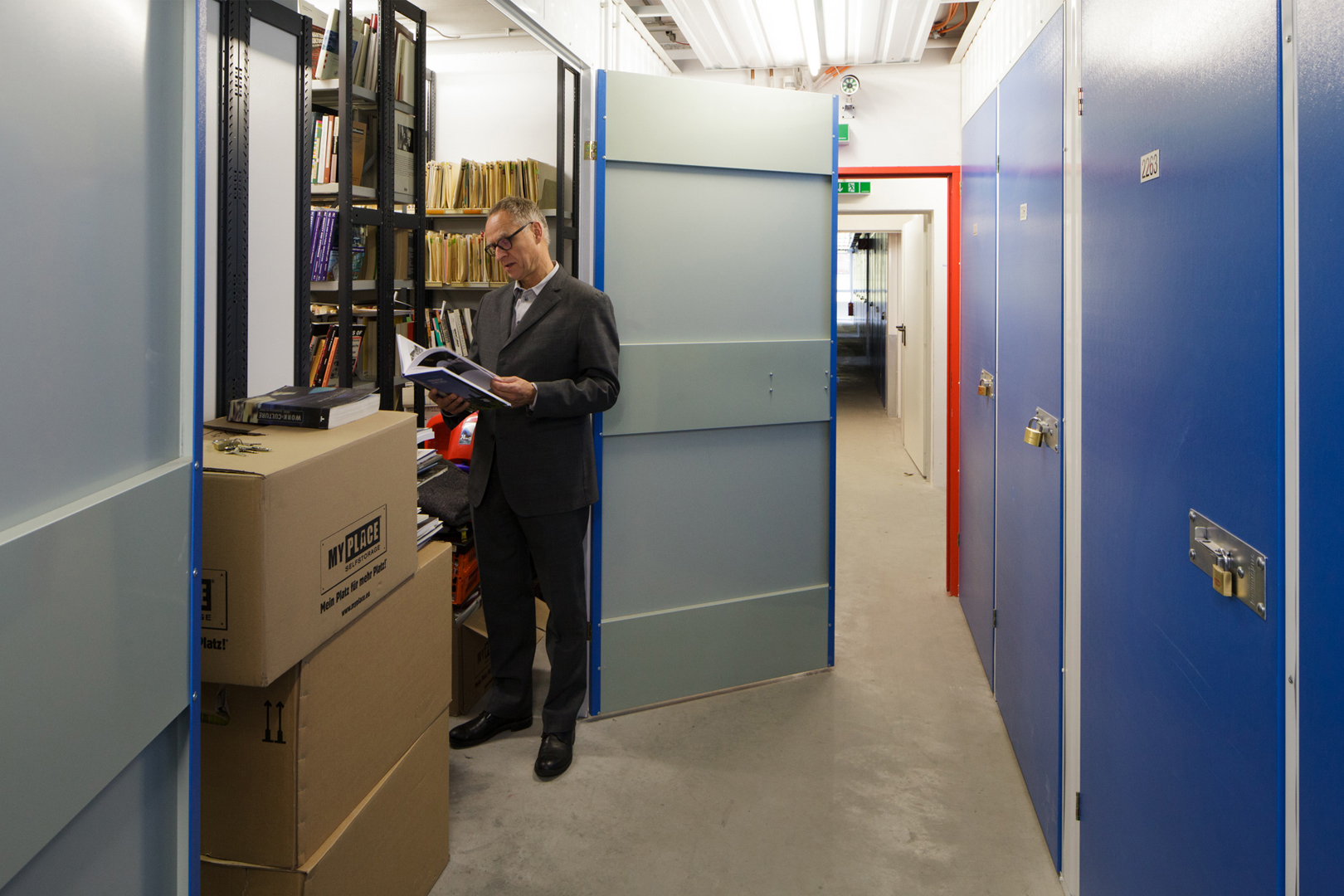 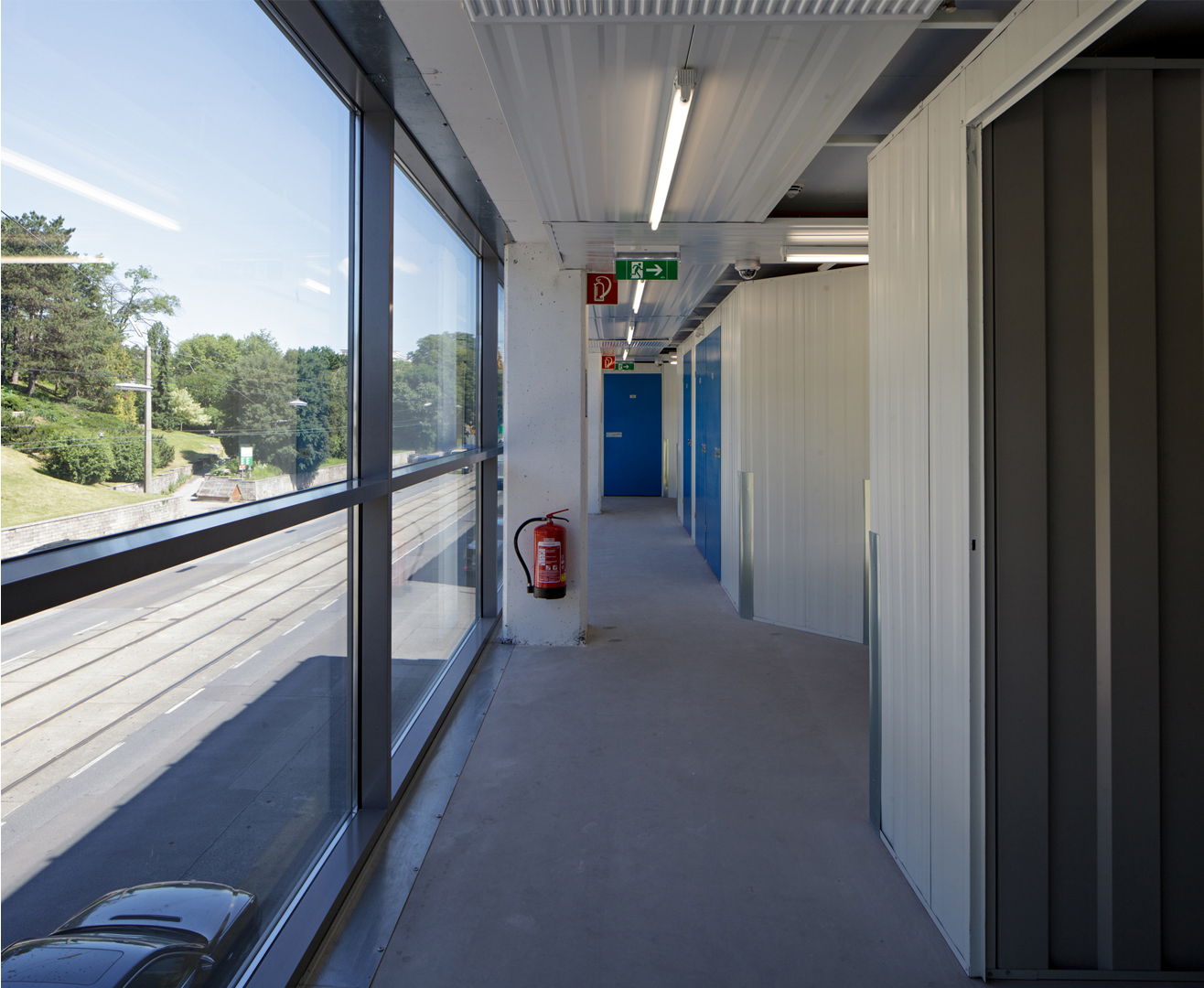 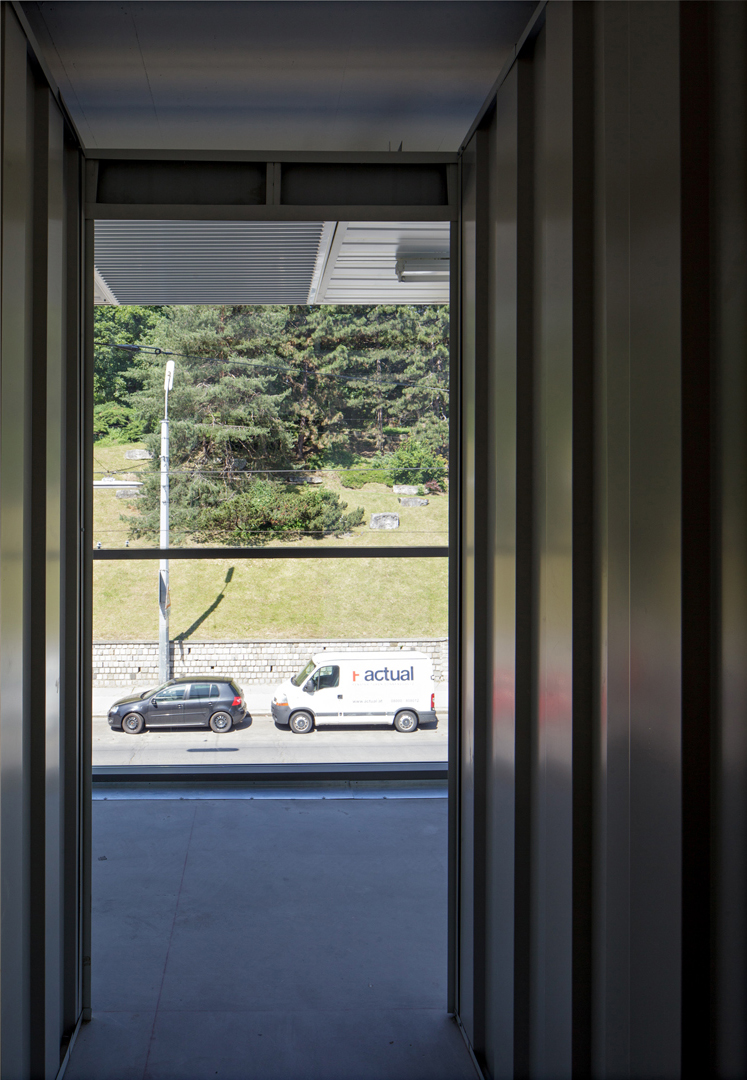 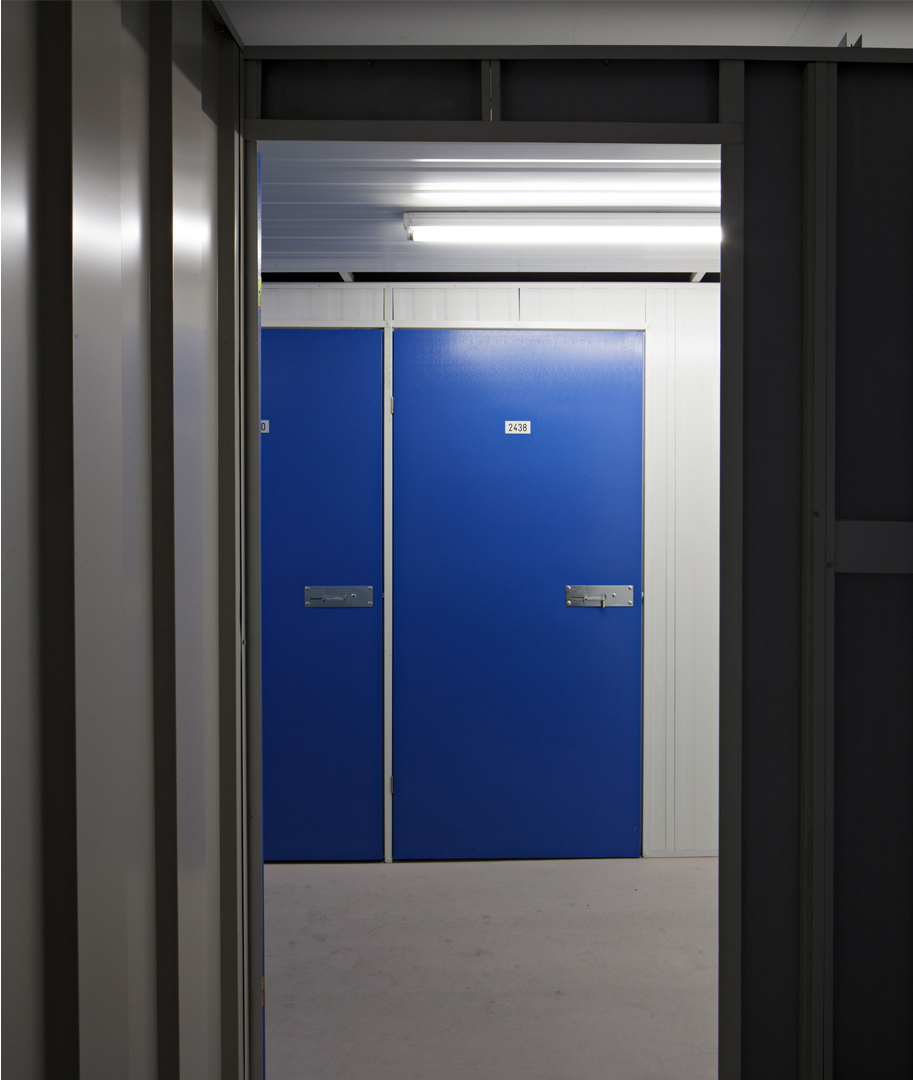 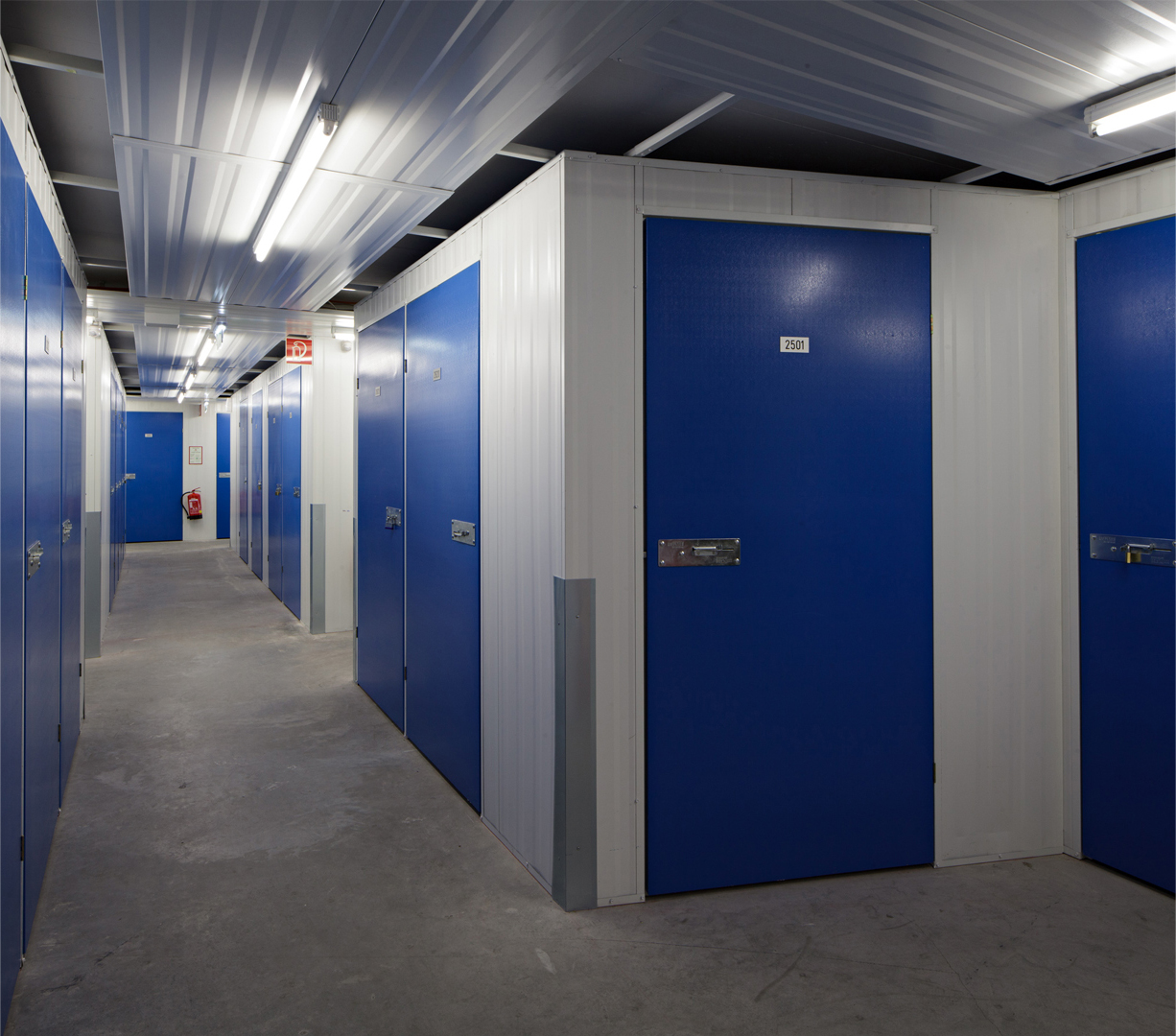 Imagine that self-storage facilities are more than repositories for (temporarily) unused objects!

Imagine that self-storage facilities are filled with stories about today’s ways of living!

Imagine that self-storage facilities become test grounds for the construction of identities!

Imagine that self-storage facilities are full of unexploited economic resources!

Detectable in city centers and suburban areas, self-storage facilities are a relatively new type of buildings. The first self-storage facilities opened in the United States in the 1960’s. From a building typology point of view, they belong to Big Box architecture, new types of infrastructure buildings for mobility, communication and exchange (Waldheim and Berger, 2012: 76). These mostly nondescript buildings are the hubs of a globalized market economy and the way of life associated with it. Companies like Amazon, Google and Facebook, or globalized vitas become localizable. However, these sites are not places in a classical sense, in which identities are being constructed and negotiated, but the pure sites of logistics and necessary infrastructure. For globally acting enterprises and vitas, these buildings and sites are not considered assets any longer, but are attributed to the annually incurring operating costs (Waldheim and Berger, 2012: 79).

Various disciplines study self-storage industry. While social science is interested in scarcity, urban economics examines demand. In architectural and urban design discourses, self-storage facilities are treated in cursory manner. The underlying economic calculations do not leave much space for spatial or material dramaturgy, the appearance is determined by façade-marketing and, from an urban point of view, they are mostly acontextual.

Although much is said about their extensive qualities, one might ask if self-storage facilities, with their countless piles of stored objects, have the potential to become urban sites. By connecting the social practice of storing with complementary activities, self-storage facilities seem to develop intensive qualities that could enrich the urban dynamics of tomorrow. They may develop into a new type of urban-storage facility that broadens our understanding of contemporary modes of cultural and economic production.

A brief look onto Cedric Price’s design for the Fun Palace (1961) might help to grasp these upgraded self-storage facilities. The Fun Palace was intended as ‘laboratory of fun and a university of the streets’ (C. P. The Square Book, 2003: 56). Different kinds of connections and enclosures can be created through a set of adaptable structures. Static elements are reduced to a minimum. What matters is not representation, but how to create an open environment for interaction and experimentation. Individuals should be encouraged to oscillate between the role of an observer and the role of a protagonist. Technology and time are the impetus of the Fun Palace. With the help of technology users can adapt their environment. The notion of time takes into account a required level of indeterminableness for changes to take place throughout the lifespan of a building. Although Price admitted that the intended activities of the ‘laboratory of fun’ are not new, he believed that the new impetus created new kinds of urban experiences, presently still unknown.

Do self-storage facilities have potential to develop into Fun Palacesof tomorrow? Let’s no longer look at them as simple repositories for (temporarily) unused objects but as interactive hubs of everyday culture. In addition to storing, which remains the basic activity, it is suggested to start interacting with the stored objects. By doing so, we open up spaces for experimentation at unexpected locations. Gilles Deleuze and Felix Guattari (1987: 531) might call it ‘retroactive smoothing’. This process describes the re-opening of smooth spaces within striated spaces. Deleuze and Guattari use this comparison to distinct spaces in which identities and spatial practice are established (striated space) or in which they become possible (smooth spaces). Further, they suggest that ‘all progress is made by and in striated space, but all becoming occurs in smooth space’ (1987: 537).

Self-storage facilities are sites where a city’s (official) organizational efforts reach their limits. What else can be done for its citizens? Self-storage facilities are temporary dead ends. Beside the successful fulfillment of their logistical function, they accommodate impossibilities of today’s vitas. Conflicting challenges such as mobility requirements and the desire for stabilized homes, or oppressed identities which seem incompatible with the social environment cannot be reconciled. They lead to the renting of storage capacity. Self-storage facilities tell us about the dynamics of everyday life. In addition, they provide insight into the diversity of the social fabric and material wealth.

The first proposition is to turn self-storage facilities into viewable storage areas (Schaulager). These viewable storage areas will turn into museums of everyday culture, providing insights into the private collections of others and putting on display failures and (temporary) impossibilities of today’s vitas. The museum’s exhibits are tagged as excess objects, stored identities or outsourced identities.

Self-storage facilities are maybe the most explicit signifiers of the change from industrial to consumer society, the society in which identities are, to a large extent, based on the consumption and possession of goods. The rapid growth of the self-storage industry can be directly linked to the economic prosperity in the second half of the 20th century. Investigating logistical landscapes, Charles Waldheim and Alan Berger describe self-storage facilities aspurgatories for the junk of our prosperity excesses, originating from impulse buying and obsolete objects(Waldheim and Berger, 2012: 82). First the consumer society makes you buy items you do not really need and then it charges you for storing them. The need to store excess objectsparadoxically originates in scarcity, as homes are not big enough for accumulated properties (leisure time equipment, library …) or is associated with preservation to store objects from previous generations (heritage).

Self-storage facilities contain as well the tributes to the modern way of living. They are Big Boxes filled with (temporarily) stored identities. Today’s vitas are more fragmented. Lifestyles oriented towards self-realization and the globalized market economy bring along mobility requirements and increased divorce rates, which on the other hand lead to increased demand for storage. One self-storage user goes as far as to say: I have a permanent address in the virtual space and a temporary physical address (Moertl, 2011). The need to store identities can be associated with chronology, the need to store objects from earlier stages of life (school time, ceased relations …) or with upheavals, the states caused by separations, moves or difficult economic situations (temporary homelessness).

Self-storage facilities are also used as neutral grounds; where one can outsource identities, which cause conflicts in everyday life. By renting a storage unit one can liberate him/herself from the straightjacket of a fixed identity (Koolhaas, 1994: 1250)and enjoy a chance to live various other ones. Identity becomes a choice. The motivation to outsource one`s identity can be associated with desire for independence (after separation common objects remain usable for both parties), otherness stemming from affections not compatible with the social environment one lives in or freedom for activities which are not compatible with private lives (hobbies).

Considering the various motives for renting storage capacities, self-storage museums mirror the heterogeneity of the social fabric. If culture, as suggested by ShumonBasar (2008) is more than the reassurance of what is commonly agreed to be good, but understood as ungovernable force and possible disruptive factor, a walk through the museum of failure offers insights into the complexity of everyday life and the consistency of the social fabric. Self-storage museums are democratic art institutions, as they do not make difference between visitors, curators and authors. They display objects, which are not commissioned and coded by high culture, but can be put into the right context by visitors with all kinds of backgrounds. No prior art education is necessary.

The second proposition is to turn self-storage facilities into theaters. Stored objects can be used as stage props for re-enactments, with the theme of playing with and searching for identities. A stored object might create a déjà vu or evokes a desire, which brings a storage unit back to life, a new one, independent from an owner and animated by imagination. Like the main character in the book Remainder by Tom McCarthy, ‘these re-enactments are driven by a need to inhabit the world authentically rather than in a second-hand manner’ (Wikipedia). They bear a chance to reconcile, for brief moments, the virtual with the actual. Out of the city’s main focuses and between sterile sandwich panels we may come closer to finding out for which plays our lives are written.

The third proposition is to turn self-storage facilities into workshops. Self-storage facilities are full of unexploited economic resources. Utilizable objects from storage units can be traded, rented, repaired or repurposed. Stored objects are detached from their intended purpose. This breaks up their stabilized identity and invites for a changeover into a world of creative-utilitarian action.  The focus is on what is actually needed or what can be imagined rather than what one should have. The economic production within self-storage facilities is about identification and passion. In addition, it fulfills the political correctness of sustainable economic activities.

Up till now, self-storage facilities have been sites without identity. They have only stored identities. Self-storage facilities have not become places yet, as places are created by events. Their quality is that they are not occupied by meaning. They form neutral stages for the infinite construction of identities and enable non-mediated experiences. The density of stored objects and the various motives for storing are the impetus of these new Fun Palaces. New kinds of relationships between objects, objects and individuals and individuals are created. The notion of time is expanded by a concept of the past. Past, present and future are equally open for appropriation. The role of technology moves closer to the actual ideals of Cedric Price. New technologies are not merely external factors, which should enable, but constituent elements of today’s relationships. These new qualities combined with the sheer endless possibilities for animated objects turn these upgraded self-storage facilities into Fun Palaces of the post-consumer society. Outside traditional centers and established patterns, new urban sites, which promote participatory experiences, are created. Instead of attending staged spectacles in city centers or suburban entertainment temples, let’s create spectacles ourselves!